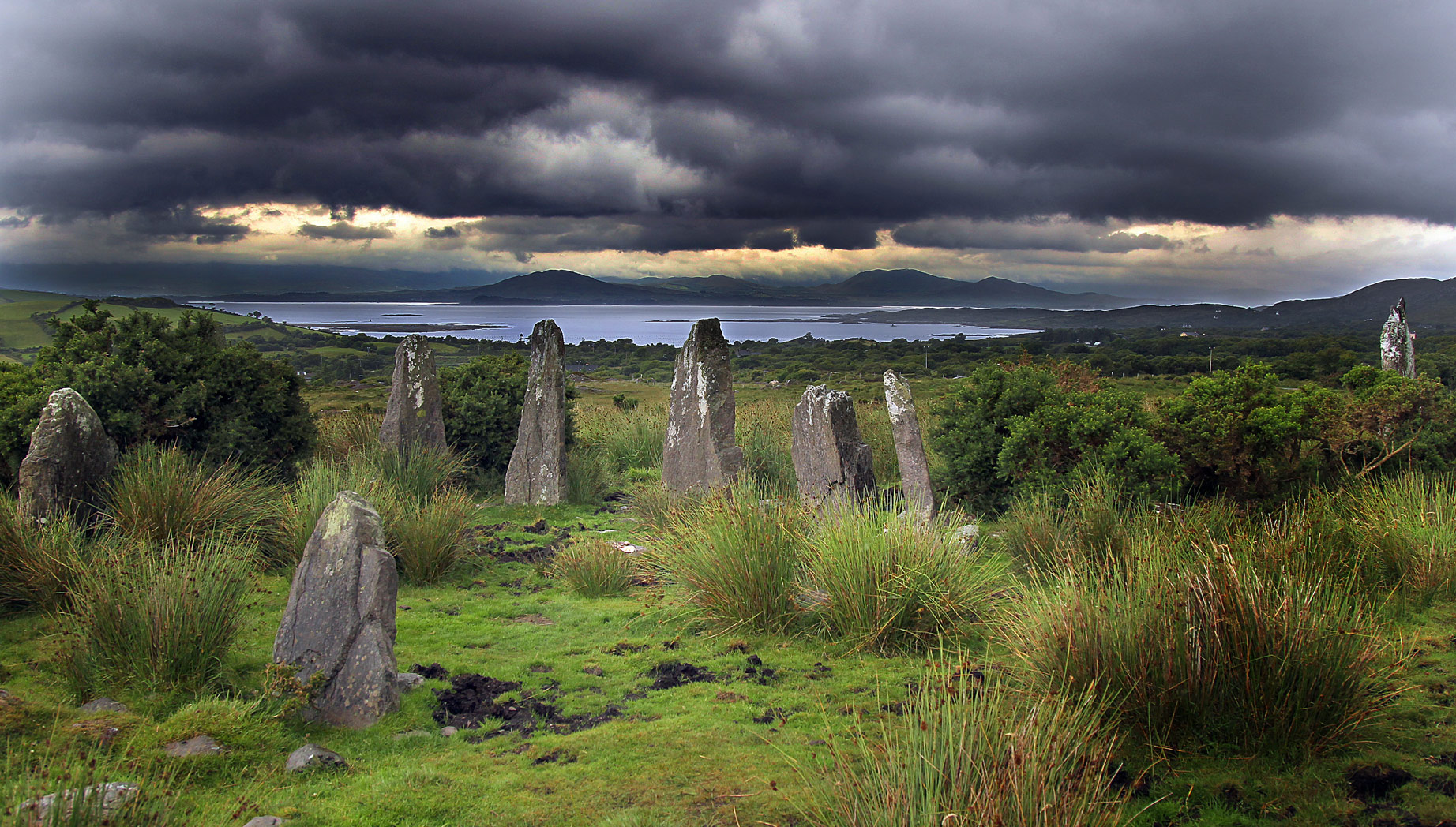 Every pilgrimage is unique and shaped to the needs and interests of pilgrims.

As a mere indication of just of one our favorite locations that lends itself to such a journey;

The peninsulas of Ireland Southwest; Counties Cork and Kerry

The peninsulas of Mizen, Sheep’s Head, Beara and Iveragh

Arriving Ireland and transfer to the region known as West Cork where our destination is the remote valley of Gugán Barra / Gougane Barra. Here in this rocky amphitheatre at the interface between rugged mountaineous peninsulas and fertile plains from where the great river Lee rises, the 7th century Christian mystic Finbarr established an isolated hermitage on a tiny lake-island on which stands today one of Ireland most beautiful churches.

Finbarr (or Fionn Bharr – the white headed one) is the founder and patron of the city and ecclesiastical see Cork, of the Episcopal seat of Caithness in the far north of Scotland and of island of Barra in the Scottish Hebrides. He is also the patron saint of marriage and figure worthy of examination on our journey.

Gúgán has an incredibly peaceful feel to it and is I feel a perfect place to start this trip with. Our first base in Ireland will be the Gougane Barra Hotel, is owned and run by a beautiful couple, Neil and Katie Lucy and their three teenage children. Neil was born here where his grandparents started the business here catering for pilgrims and those drawn to this tranquil and wild place. It is a quaint and charming little place, a remnant from another era. Kate is a fine cook, creating beautiful meals drawn from her own garden and local Slow Food producers for whom their work is itself a divine calling. The hotel had a lovely, intimate little bar and common rooms ideal for whatever gatherings we might need and of course, we would have access to the gorgeous chapel. There is ample opportunity too for some walking; gentle, moderate and strenuous walking on the hills and forest park adjacent. There is the remains of an ancient pilgrimage route and of course, the trail known as the Ó Suilleabháin Bere Way passes through here. 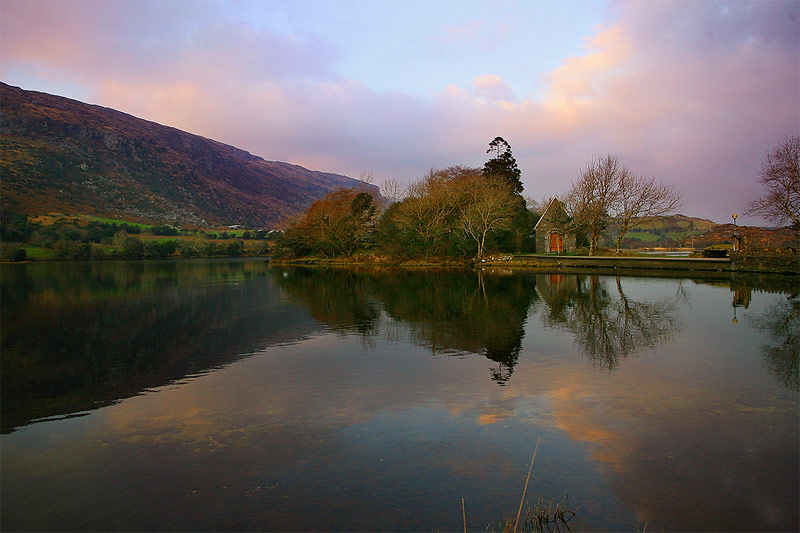 Today, on our first full day in Ireland we will range out from Gougane to sample this very distinctive region known as West Cork. It is a place of vibrant colourful villages set amidst a pastoral landscapes of small fertile farmsteads and rugged coastlines. In particular, this morning we will explore some of particularly striking archaeology on the Mizen Peninsula, Ireland’s most southerly point; Wedge Tombs from the Neolithic Stone Age (c.6000 years ago) Stone Circles and mines from the early Bronze Age (c.4000 years ago), maybe having a special service at the beautiful Stone Circle.

This afternoon, we would head out along the narrowest of the five peninsulas of the Southwest known as the Sheep’s Head – ‘ one of Ireland’s best kept secrets and one the most beautiful places on Earth!

It is a tiny little promontory, the smallest of these peninsulas, just two miles wide by twenty or so in length. It is a place of breath-taking beauty where a warm community of some six hundred or so souls made up of a eclectic mix of local farmers and fisher people and colorful “blow-ins” combine to make give this hidden place a the most laid-back, contented ambiance in Ireland.

This is a very special day in an area of spectacular land and seascapes with highlights including exploration of the region’s deep history stretching back to the arrival of Ireland’s earliest people through to collapse of the Gaelic chieftains and their world in the 17th century, the Spanish Armada, the ensuing English plantations, French republican fleets and the story of the emergence of modern Ireland. And of course there is a local saint and early ecclesiastical site. Kilcrohane, the main village here is named for; Cill – church of Crochán, a 6th century holy man who lived here and his lovely little ruin by the water’s edge might be a place for us to visit. 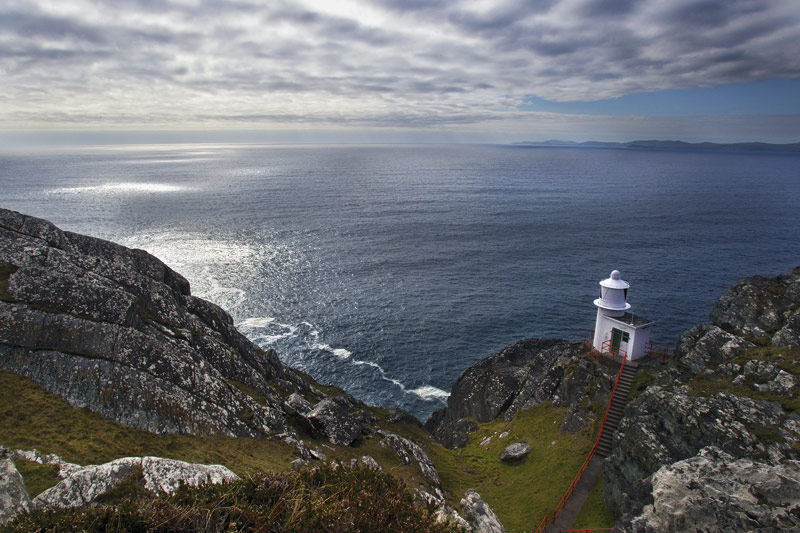 Above: The smallest and remotest of the five peninsulas of Ireland’s south-western corner; The Sheep’s Head.

Named in honour of the form-shaper of the land itself, the powerful land goddess Beara, this is some of Ireland’s wildest ground. Again the walking here is awesome – and suitable for getting almost everyone of varying abilities to taste some of it, especially along the high rocky ridge dividing counties Cork and Kerry and take in the mighty Hungry Hill and Healy Pass.

This is the ancient territory of the O Suilleabháin Beara (O Sullivan Bere) clan who’s flight from Beara in 1601 under the leadership of their great chieftain Donal Cam (Morgan Llywelyn’s The last Gaelic Prince of Ireland) marks the collapse of the gaelic order in Ireland and our time here will touch on this route and explore this incredible epic march of a people reminiscent of the Cherokee Trail of Tears where of the 1200 that began the walk, just 35 reached their destination 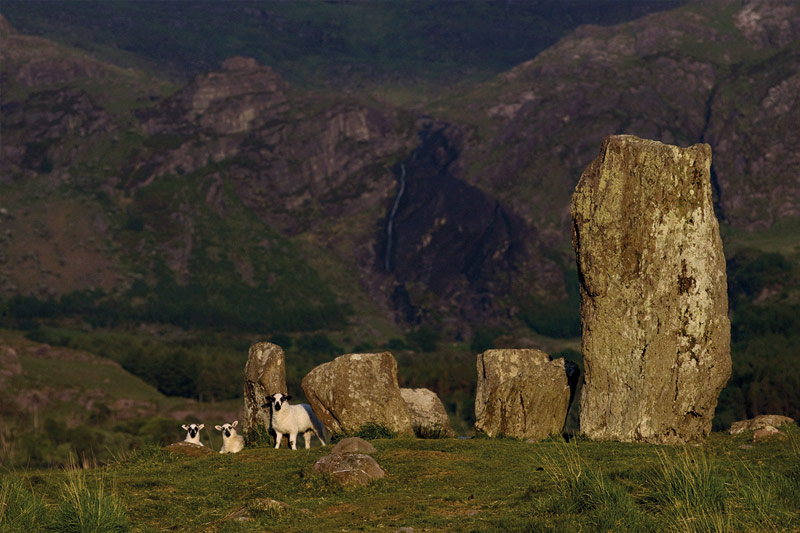 Shifting base today northwards through Kenmare ( taking time there of course) and on to explore the Killarney Valley and environs.

There would be an opportunity for the more active again to hike some this morning along a section of the Kerry Way re-connecting with the rest of the group after an hour or so. This would take walkers through the heart of Ireland’s finest national park, into wild moorlands etched with the remnants of pre-famine Ireland’s Gaelic populations.

My idea here is that we would all share perhaps in a service/ceremony with you in the woods there by the Upper Lake before feasting from another wild picnic. Therafter, we would be picked up by boat and taken on down the lakes to the monastic island of Inisfallen on the lower lake.

Founded by St Fionan in the 6th century, Inisfallen was home at different stages to a hermitage, a leper colony and famous monastic school where many of Ireland Gaelic nobility were educated. The Annals of Inisfallen of course are a very important source of our medieval history. (We could of course defer our ceremony and lunch to this place too) Boat directly to our accommodation, a secluded place on the outskirts of town. 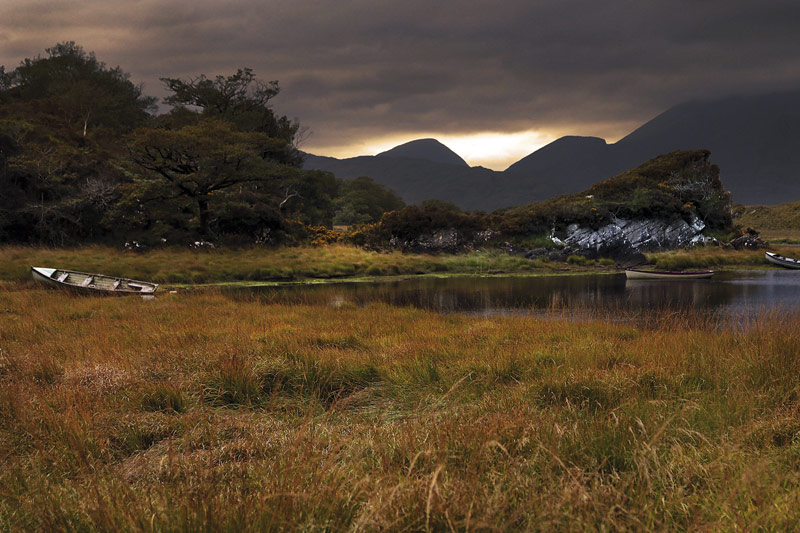 From Killarney, this is a pleasant hour’s drive along the Ring of Kerry to Portmagee and the departure point for Skellig Michael.

Skellig Michael or Scelig Mhicíl is one of Ireland’s three UNESCO World Heritage sites, located 10 miles into the North Atlantic beyond Ireland’s most westerly headlands near the ancient Edge of the World. A famed early Christian monastic outpost that simply has to be experienced, it is also a world renowned bird sanctuary (Gannets, Storm Petrels, Manx shearwaters, Puffins, Guillemots, Razorbills)

Irish writer and Nobel Laureate, George Bernard Shaw visited here in 1910 and wrote; “But for the magic that takes you out far out of this time and this world, there is Skellig Michael ten miles off the Kerry coast, shooting straight up seven hundred feet sheer out of the Atlantic. Whoever has not stood in the grave-yard on the summit of that cliff among the beehive dwellings and beehive oratory does not know Ireland through and through.”

Those unfit to make this journey would tour the Skellig Ring/Valentia Island area before re-uniting with the rest of us. One thing I would love to do is to get everyone out on some ribs ( fast, rigid-hulled boats) that would give us access to the enormous sea-caves around Valentia and beneath the huge cliffs and sea bird colonies. 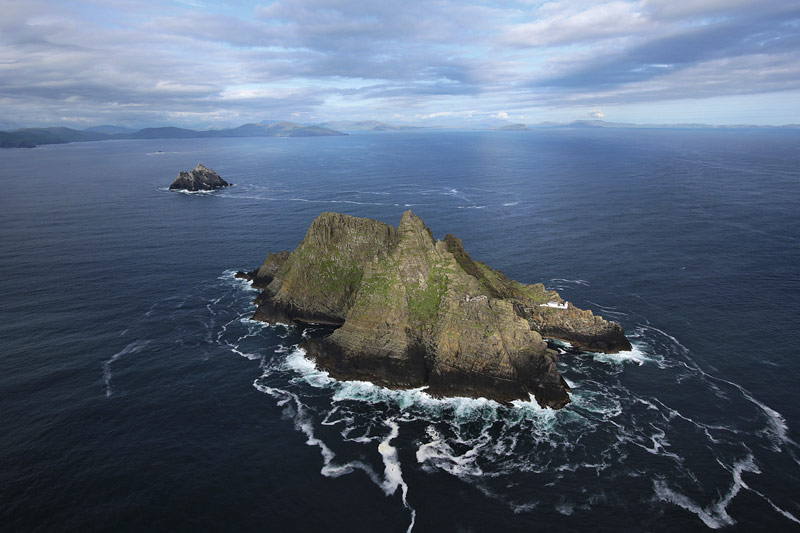 Transferring onto the Dingle Peninsula via it’s north coast for a walk on the great sweep of strands there at Brandon Bay. Then, there would be a chance for the more active pilgrims to take one of the great old pilgrimage routes – ascending Brandon via the spectacular, paternoster lake dotted Eastern Route. This giant hill of contrasting physical features has been the focus of fifty centuries of ritual for the people in this region of Ireland and beyond since the stone ages.

Today, the active members of the group might wish to make the strenuous hike along this pilgrim route to the summit and down the western side of the peak where we would meet the rest of the party ascending via the Stations of the Cross on this side.  There are of course lots of opportunities this day to pray together, including a late afternoon service (maybe sunset!) at the Gallaras Oratory, with some local musicians, singer, poets perhaps!.

This evening and of course the next, we would seek to connect guests to the powerful well of traditional music, song and poetry in the area with intimate contact with local artists and friends, many of whom are internationally renowned. 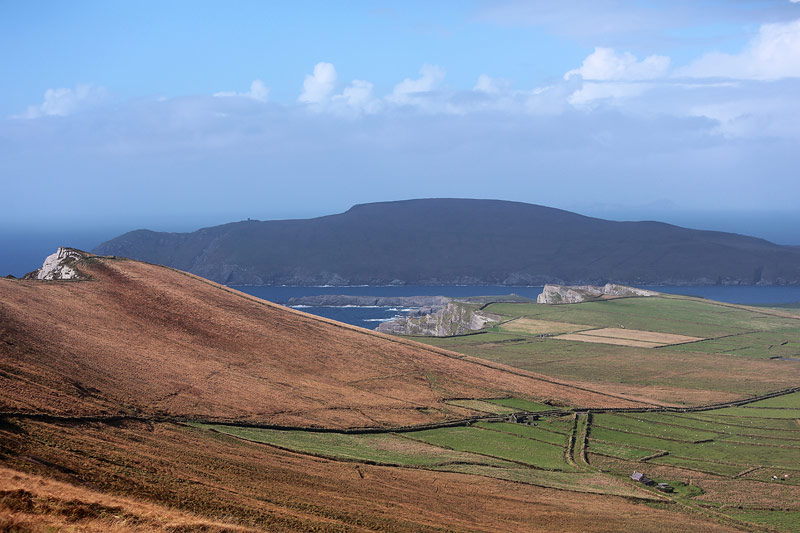 Above: The Dingle Peninsula, once of the richest archaeological landscapes on Earth.

This makes for a perfect final day, out and around the westernmost tip of Ireland. If weather permits, we can access the Great Blasket Island it from Dingle pier, a now deserted island where an extraordinary cultural heritage emerged in written and oral form from among it’s last inhabitants at the turn of the 20th century.

Staying on the mainland, the area once referred to by the National Geographic as being “probably the most beautiful on Earth” is one of magnificent antiquity from the early Celtic church, among many sacred sites.

There would be time this afternoon in Dingle town for people to explore and shop etc. One possibility today(even early morning) would be for a service at the old convent chapel beneath the magnificent Harry Clarke stain glass windows…or at St. Gobnait’s Well out near Slea Head. 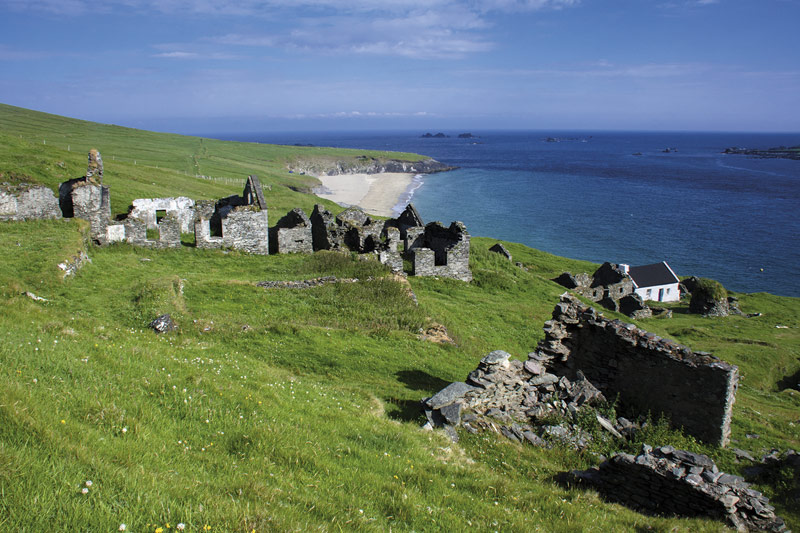 Above: The Great Blasket Island.

It was a blessing to travel through the south western peninsulas with you.  I remember the hike on Sheeps Head fondly as well as many other places we visited and the people we met.  Your countrymen are amongst the most hospitable, this together with lots of fun, good food, scenic vistas, camaraderie and more made the trip a life changing experience.

This outstanding walking tour can be operated at the time of your choice for your group. The walking levels are ultimately based on the needs of the participants with spectacular hikes available throughout, ranging from Easy to Strenuous.

The price varies depending on the size of your group and your choice of accommodation. Please contact Binky for the details on info@hiddenirelandtours.com

Available at any time throughout the year for private parties.