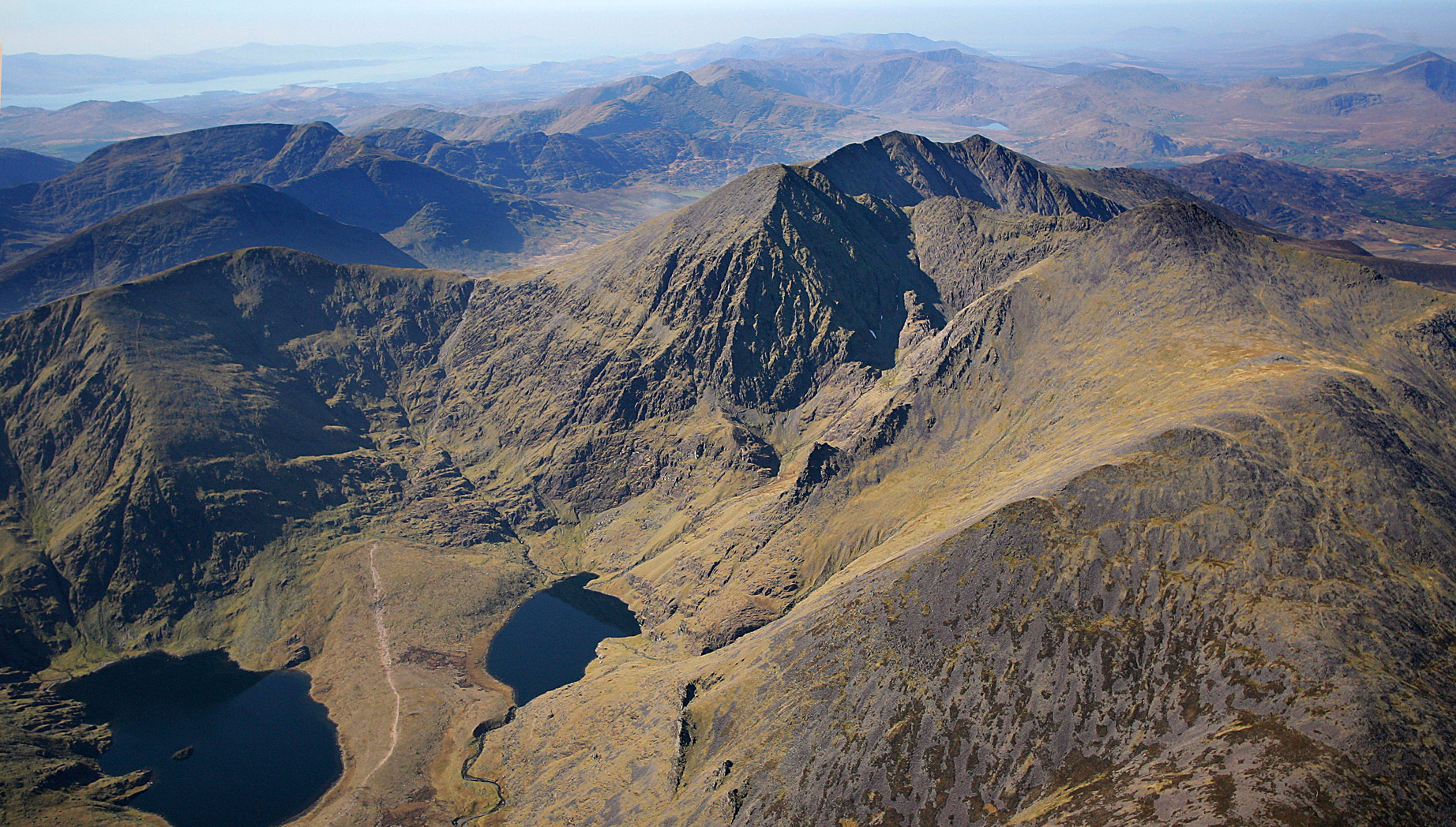 Corrán Tuathail and the McGillycuddy Reeks

Private guided ascents of Corrán Tuathail, Ireland’s highest mountain every Wednesday and Saturday throughout the year. Plus private guiding available for a range of routes including walking, scrambling and climbing.

Our interaction with this sacred place is shared with individuals and small groups only.

We offer regular guided ascents by various routes on Ireland’s highest peak throughout the year. These ascents provide a rare insight into the rich nature and culture of of the region and offer an intimate experience over walking, scrambling or climbing routes.

(Rich family connections underpin our guiding on the Reeks dating back to the earliest decades of the 1800’s when one Con “Curney” Moriarty worked as a guide for the local O’Mahoney landlords at Dunloe Castle in the years up to the Great Famine and referred to in some of the earliest written accounts of climbing in the region by the aristocratic English. Curney’s son Dan born in 1847 in the Gap was active then for over two decades before his son, Con became a notable guide operating in the region for over forty years. This Con, (1874-1947) is the grandfather of the current Con Moriarty and great-grandfather to Naoise, blessed to be sharing these landscapes in these times.)

The Classic Routes of Corrán Tuathail

– Every Saturday and Wednesday and privately at any time, including regular Full Moon and Dawn ascents. Exhilarating hiking and climbing amidst our wildest and loftiest nature – with a rare insight into the region’s rich history and archaeology, place names, folklore and myth.

Hallmarks of walking and climbing with us:

All types of Walking, Scrambling and Climbing routes available on Corrán Tuathail ( Carrauntoohil ) and surrounds…

Corrán Tuathail; a traverse from An Com Cailí/The Hag’s Glen via a selection of routes, usually tasking in the spectacular hanging valleys around Loch Choimín Uachtarach, Ireland highest lake. A range of ascent and descent routes present to suit most abilities – though nothing one would call easy! Note worthy among them, ascending via Coimín Úachtarach and Brother O’Sheas’ Gully to the Binn Chaorach Ridge and summit before descending via the old mass track, Bothar na Gíge.

Com Lothair Horseshoe (aka. Coomloughra); regarded by many as the finest mountain circuit of it’s kind in the land, the magnificent valley known as Com Lothair (the valley of the western lakes) is located at the north western corner of the Reeks. It’s circumnavigation takes hikers over the three highest peaks in Ireland; Cathair na Féinne (1001m), Corrán Tuathail ( Carrauntoohil ) (1039m) and Binn Chaorach (1010m). The outing is a classic ridge mountain walk and easy scrambling high over our deepest corries with views throughout the south west.

Ridge of the Reeks; the classic east-west traverse of the main ridge of the McGillycuddy Reeks is one of Ireland’s great mountain expeditions, this outing takes in several of our highest peaks. A challenging day along the tops, sometimes negotiating exposed edges, on a fine day, the views are without equal; mountain, plain and ocean. In winter, the traverse provides the finest piece of mountaineering of it’s kind in Ireland.

(One of our favourite things to do is to tie in this traverse with one of the classic ridge climbs on Corrán Tuathail; Howling Ridge, Pipet Ridge or Primroses).

The Hag’s Tooth and other Classic Scrambles including; An Fiacail Mhór (The Hag’s Tooth), Stumpa an t-Saimh and the East Ridge of Binn Chaorach, The North East Face of Cathair na Féinne, The North East Ridge of Cnoc an Chuillinn, The Big Gun and the rocks of remote corrie of Loch gCuach, are just some of our favourite parts of the Reeks where easy movement of hand and foot leads quickly to high exposure.

Share a rope with Con and link up a series of favourite scrambles on the shattered sandstone rocks of the Reeks:

Howling Ridge and other Classic Climbs; including notable ridges on Corrán Tuathail in the company of their first ascentionist; The North East Ridge (Primroses), Howling Ridge, Pipit Ridge.

“In February 1987, I led a climb up snow and ice covered slabs and short towers that tapered as it went into a defined ridge paralleling Collins’ Gully on the East Face of Corrán Tuathail. It was virgin territory for climbers and the splendid winter route that emerged, I named Howling Ridge.”

On that first ascent which I shared with a teenager named John Cronin (from Cronin’s Yard ), I climbed the most aesthetic line in front of me, climbing a series of steps and prows straight-on that involved a handful short but technical moves, some overhanging before reaching An Túr (the tower) and An Mhéar (the finger) pitches near the top.

I had no idea coming off the hill that day that Howling Ridge would gain the popularity it has. A weakness or otherwise of the climb is of course that many of the more difficult steps encountered can be avoided. These are usually turned on the right-hand (northern) side, options clearly taken by the majority of people undertaking the climb.

In my mind, Howling Ridge is still a fabulous but rather serious outing under winter snow and ice. Without, it is an easy, exposed rock climb over shattered rocks and short walls – with the overhanging Prow providing a short VS pitch (4b or so) before the lovely V. Diff pinnacles above. Avoiding these little gems, especially low down on the route is the choice taken by the many people for whom ‘ doin’ Howlin’ sems to be an important tick off their list. On my guided ascents, the integrity of the original climb is honoured.”

The Ridge of the Reeks

Simply, the finest mountain traverse in Ireland with 7 summits over 3000’! From Kate Kearney’s Cottage, Gap of Dunloe to Doire na Féinne and Loch a’ Chúis. A number of times a year, Con Moriarty guides small, intimate groups, providing a rare insight into the rich nature and culture of this place.

Classic Traverse of the Ridge of the Reeks

(alias, The Ridge of the Reeks or The Reeks Walk)

On a number of occasions throughout the year, Con Moriarty guides a small number of mountaineers on this magnificent expedition, sharing the special heritage of this place that is his life’s passion.

Quite simply, there is no better way to experience the Reeks than with Con Moriarty