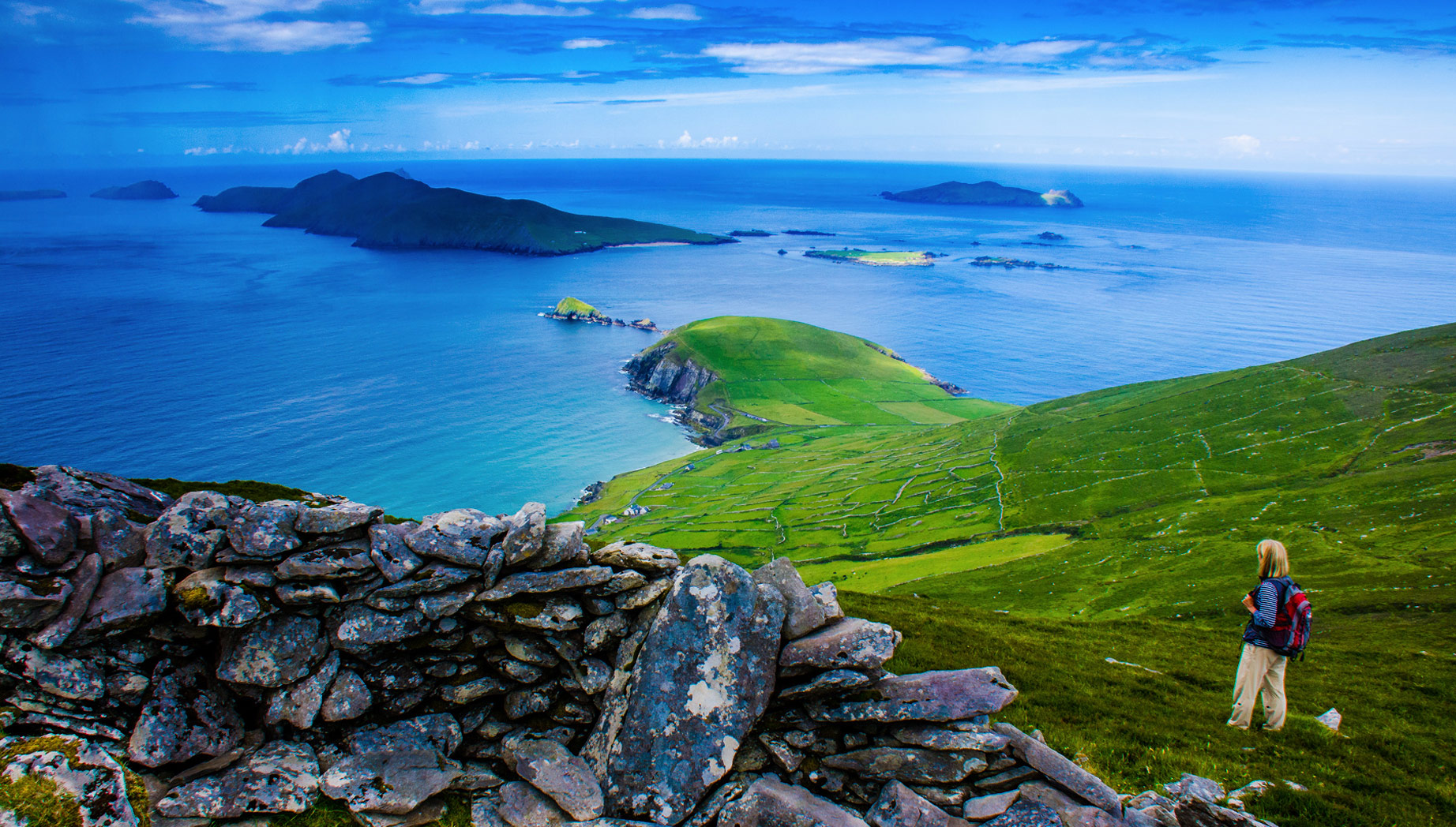 It is only in recent decades through the power of film that the beauty of the Dingle Peninsula attracted global attention. A spine of mountains form the back bone of this place of outstanding natural beauty – overlaid with an extraordinary human interaction with land and seascapes with 3500 archaeological antiquities mere hints in the story…

It is only in recent decades through the power of film that the beauty of the Dingle Peninsula attracted global attention. A spine of mountains for the back bone of this place of outstanding natural beauty indeed – but overlaid with an extraordinary human interaction with land and seascapes with 3500 archaeological antiquities are a mere hints in the story.

The western end of the peninsula is dominated by the bulk of Cnoc Bhréanainn / Mount Brandon, one of our holy mountains, great sea cliffs and sheltered bays while the Irish language (Gaelic) is the spoken vernacular of it’s community. At this time, Dingle town is probably one of the very best traditional music locations in Ireland, where the indigenous wealth of music and song has been energised by those who came to the region because of it – and by those who come to hear it.

A note from Con Moriarty:
These are just some of our favourite walks and hikes around the region we call home. There are in fact many more but we are a little hesitant  to mention them here – for fear of too many people discovering them. I speak of wild and untouched places that stand in comparison with any of the wild places I have experienced around the world, places largely unknown and unseen, delicate and  breathtakingly beautiful. These are the places we go to by ourselves and on occasions, share with small numbers of friends and discerning guests.

(One of these is the remotest and least visited early-Christian monastic outpost in Ireland – and maybe anywhere on Earth. Truly!)

– Brandon Bay / Maharees
The great strands of Brandon Bay provide one of Ireland longest bays, wrapped between the great bulk of Brandon Head and the low-lying limestone islands of the Maharees. Just over two decades ago, foreigners to these shores declared this region a windsurfing paradise of world but besides this, the shoreline of Brandon Bay provides flat walking amidst stunning mountain and ocean scenery-as much or as little as one needs! Depending on the wind (on the famous wind-surfing bay!), we will usually walk toward Mount Brandon, usually illuminated in spectacular light. On other occasions, we have the wind at our back – and are conveniently blown to Spillane’s Gasto Pub at The Maharees.

– Dingle Harbour
The foreshore of Dingle Harbout and the entrance to Dingle Bay is a place of great history as well as natural beauty. The trail here provides a perfect sojourn for this looking for a morning run and ramble at anytime and of course the journey come’s alive in the company of a native scholar.

– Ceann Bhaile Dháith / Ballydavid Head
The eastern approach to the great Harbour/Bay of Smerwick at the northwest of the Dingle Peninsula is flanked by a spectacular uplift of jagged peaks that fall abruptly in heights of up to 600 ‘ into the ocean. The great headland of Ballydavid innlet of Feothanch and from here a gentle ramble along the coastline (incredible at sunset!) takes one onto steeper and altogether strenuous hillsides and the 19th  towere from where British colonists kept lookout for Napoleon.

– Sliabh an Iolair / Mount Eagle
Mount Eagle is one of the great coastal hillwalks on Ireland’s Atlantic seaboard, our route her follows a turf-cutter’s road to the rounded summit before we descend a tapering ridge-line that extends to the westernmost rocks in Ireland. The lofty situation of this place and it’s vast panoramas of the Atlantic bays of the region, local headlands, mountains and islands make this quiet simply; as good as it ever gets! It is particularly awesome place to take in the majestic light of the region, most especially in the wake of a weather front clearing through)

– An Bhlascaod Mhór / Great Blasket Island
The Great Blasket is the largest island in an archipelago that lies off the western end of the Dingle Peninsula. It is a place of rugged oceanic scenery where the elements of Nature are powerful present. In addition however to an extraordinary natural history, no exploration of this places is possible without touching on the incredibly rich cultural tapestry woven into it’s history. Our walks here are guided by people with powerful connections to the people of the Blaskets, who’s stories of this land and seascape and the literary people who have lived here will resonate long after one departs the island for Dingle or nearer Dún Chaoin.

– Cnoc Bhréannainn / Mount Brandon
Outside of the McGillycuddy Reeks where Corrán Tuathail and three of it’s satellites are higher, Mount Brandon located at the western end of the Dingle Peninsuala is higher than any other peak in Ireland. Cnoc Bhréannainn however is a place apart, an incredible spectacular mountain massif with contrasting sides.

On the west, it’s  huge whale-back western slope and a savage, steep sided eastern aspect where a dozen small mountains lakes tumble from one ledge to another. It is a holy place – and has been for thousands of years. Stone age farmers etched rock art on boulders inspired by it, bronze age people raised stone rows aligned with the setting sun on the Sacred peak. Brendan (c. 484 – 577), the Patron Saint of Kerry Christianised this great ritual site and a pilgrimage tradition flourish here that remains to this day.

A variety of great hikes and scrambles ranging from Moderate to Very Difficult present here, from the Pilgrim trails to the summit from the east and western approaches to the step narrow ridges, such as the Faha Ridge. A personal favourite is a traverse of north-south main ridge that essentially forms the widest span of the Dingle Peninsula along the edge of the Brandon massif itself. It is a mountain walk that is comparable with anything on these islands with views of – “mountain and ocean with a little bit of land in between”…

Con, A brilliant trip, what a grand experience to learn about Ireland from the inside out, to hike its emerald hills and have the opportunity to share your land and culture with you, a very special man.