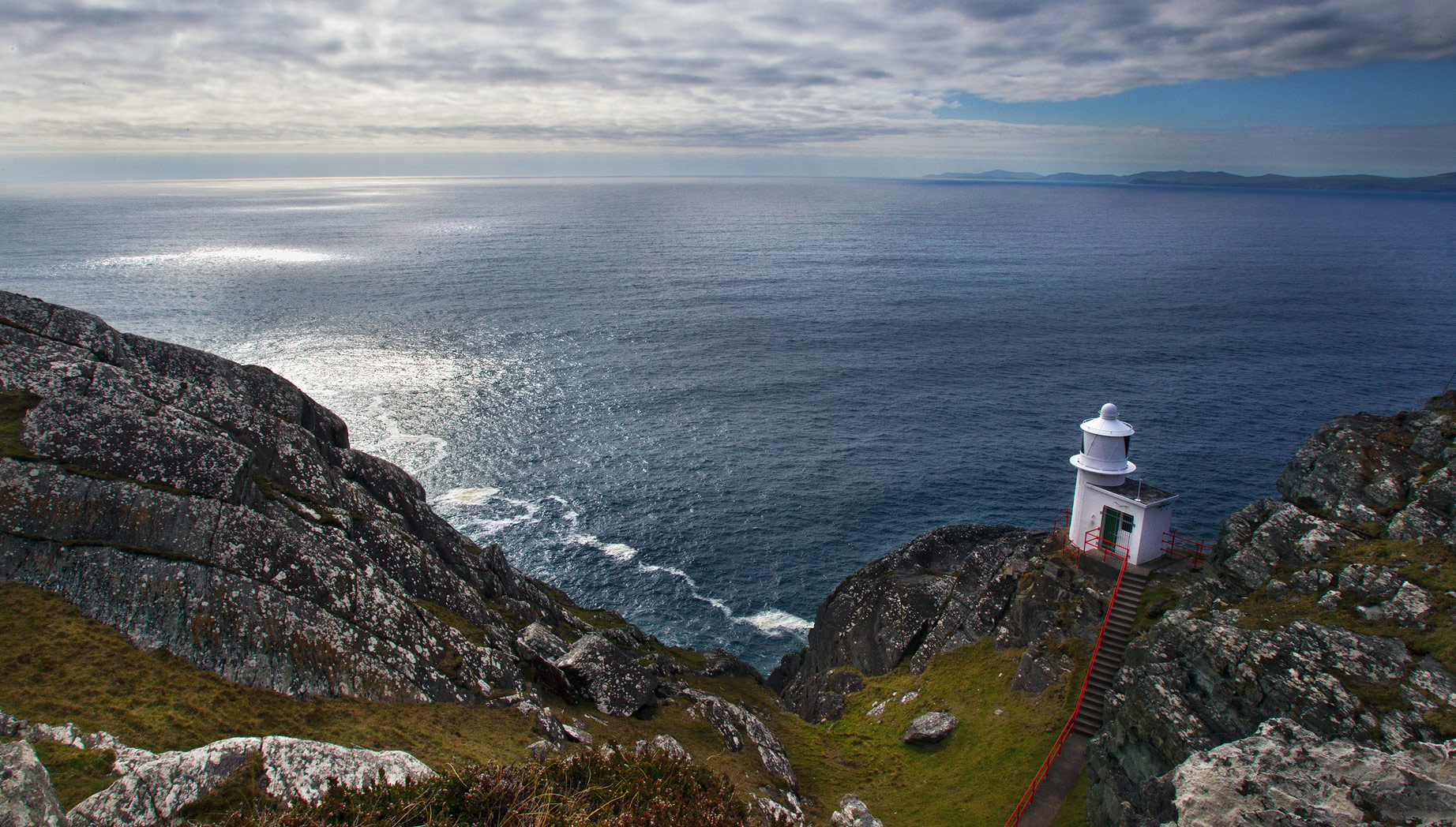 The most southerly of Ireland’s promontories, Mizen Head is the most southerly point in Ireland. Less rugged than the other peninsulas albeit with stupendous cliffs near it’s tip Mizen has been attracting people from the mists of time as evident in it’s fine archaeological inventory.

Three Castles Head
The dramatic sea-cliff promontory known as the Three Castles lies just north of Mizen Head itself. Secluded and rarely visited in comparison to it’s more famous neighbour, this headland standing over the southern end of Dunmanus Bay holds one of the most spectacular historic ruins in the region. Dating only from the middle ages, the three castles..or more aptly tower houses and lookouts are the work of the McCarthy chieftains and form part of an elaborate fortification between a mountain lake and sheer and magnificently sculpted sea-cliffs. The walk here touches on the archaeology of the region, in particular the Stone Age and Bronze Age megaliths.

This is the smallest (skinniest!) of the five peninsulas of the southwest of Ireland and located between the Mizen and Beara Peninsulas, this another one of the very special places in the world. Bantry Bay to the north and Dunmanus Bay to the south give this promontory, an almost island feel and with just two small roads leading here (- one named the Goat’s Path), the Sheep’s Head is visited only by those who seek it out! For those who live and know this place, it is a place of beauty and peace – and something else that’s difficult to pin-point, a magic in essence and felt by all who know it.

The natural assets are of rugged coastlines below over a spine of low but wild hills, etched along their lower reaches with a patchwork of small lush farms and cosy homesteads that shelter it’s warm-hearted community.

The Sheep’s Head Way walking route is the vision and gift of this community and is probably Ireland’s finest trail. It is known locally by those over who’s land the route follows, as simply, The Walk (- and everyone it seems in interested in “how you liked it ?” ). The route circumnavigates the peninsula of almost a hundred kilometres (sixty miles or so) and favourite sections or loops are simply too numerous to mention. However, although ideally suited for walkers staying locally or in the West Cork region at least, a journey here to sample this place by the best means possible is worth any effort. ( On the way, another must is picking up a picnic lunch of Slow Foods from the region at Manning’s Food Emporium in Ballylickey outside Bantry).

We love this beautiful valley and often walk or hike here, usually from the very special base of the Ósatan Gúgán Barra (Gougane Barra Hotel) owned and run by our friends, Neil and Katy Lucey and their family. Nestled at the source of the River Lee that flows into the ocean at our second city of Cork, Gugán is an amphitheatre surrounding by steep hillsides and cliffs at the head of the Beara Peninsula and close to the boundary of counties Cork and Kerry. A peaceful and remote place, the small island on the lake of the glen became the site of a lonely hermitage founded by Naomh Fionnbar (St. Finbarr) in the 6th century for the purpose of retreat.

The region holds a rich history with evidence at the mouth of the glen of pre-historic ritual sites but beyond this and it’s ecclesiastical record, other great stories are held here. Donal Cam O Sullivan, chieftain of Beara stopped here with his followers on their incredible exodus from the Beara Peninsula on New Year’s Eve in 1602. Following the defeat of the Irish and Allihies at the Battle of Kinsale in 1601, a scorched earth policy was adopted by the Elizabethan forces in Munster and following the destruction of his castle at Dún Buí (Dunboy) along with the slaughter of many of his people and his livestock, O’Sullivan abandoned Beara on what became a trail of tears where of the 1050 that set out, just 35 people reached their destination in the north after 15 days. Late on his first day, the fleeing
colum stopped to pray at the hermitage at Gugán.

Con,    What can we say? you’ve don’t it again… guided us through the most wonderful vacation we could hope for!   We love Ireland and you for opening its beauty to us in your special way.   Whenever we look back on our favourite points in the trip you are there with history, geology and local stories.  We cant thank you enough until next time. ..