As 2020 draws to a close with deep wishes that a new year will bring a rise in fortunes, Ireland is reflecting on its War of Independence (1919-’21) with particular emphasis on some of the milestone events that took place just one hundred years ago preceding British withdrawal from 26 of Ireland’s 32 counties and the setting up of the Irish State.

As the 20th century dawned, British occupation and rule of Ireland was over seven centuries old and yet again, another wave of resistance was rising aimed at self-determination. In pursuit of this nationalist agenda, advancement of two contrasting visions were being sought by those content with securing devolution known as Home Rule through British constitutional means whereby Ireland would remain withing the United Kingdom but have its own parliament and limited autonomy and those for whom nothing short of an all-out, break-away republic would suffice, the latter believed possible only through militancy. In 1912, after decades of agitation holy grail of Home Rule was finally grated by the Westminster parliament only to be fiercely resisted by passionate Unionists in the majority in the northeast of the island presenting the British Government with a constitutional crises.

The outbreak of World War 1 provided a reprieve from the debacle with nationalists and unionists donning British Army uniforms to fight the Kaiser for the lofty ideals sold them. The Easter Rising of 1916, when nationalist Irish Volunteers not fighting in the Great War rose up in rebellion aimed at ending British rule in Ireland powerfully altered any ideas that might have prevailed to escape the Home Rule Crisis. The rebellion was smashed in the days following the Proclamation of the Irish Republic and it’s leaders executed leading to outrage among the populace and a collapse in popular support for devolution in favour of a groundswell demand for an independent republic.

In the British General Election of 1918 that followed the end of the world war and Armistice with Germany this was reflected with the effective collapse in support of the moderate Irish Parliamentary Party and the rise of the Republican Sinn Féin party who stood before the electorate on the principles of the Proclamation and promised to not take their seats in London but instead to set up an Irish parliament or Dáil. On doing so, the first Dail committed itself to the 1916 Proclamation and pledged to its defence if required through the newly constituted Irish Republican Army/IRA. London viewed the assembly and it’s work as illegal and duly arrested it’s elected representatives.

The ancient festival of An Samhain or Halloween in 1920 was a period of intense violence and political tension. The war had raged all that summer into the fall with guerrilla attacks by the IRA on Crown personnel intent at maintaining the status quo and supressing the independence movement; the British Army, policemen of The Royal Irish Constabulary (RIC) and it’s infamous Black and Tan regiment along with its counter-insurrection Auxiliary Division (Auxiliaries) and counter attacks and incarcerations. British administration was collapsing and martial law and curfews were imposed in many areas as Fall deepened and the temperature rose in a period that saw some of the most significant events of the war. On October 25th, the elected Lord Mayor of Cork City Terence MacSwiney died in Brixton Prison in England on Day 74 of a hunger strike. MacSwiney was a playwright and author as well as nationalist politician and IRA leader embarked on a hunger strike along with 11 others. He had been elected Lord Mayor earlier that summer following the fatal shooting of his friend and previous mayor Tomás Mac Curtain.

MacSwiney’s protracted hunger strike was widely publicised across the world leading to a wave of anti-British sentiment and inspiring others in pursuit of independence from the British Empire, most notably perhaps Hồ Chí Minhin Vietnam and Mahatma Gandhi in India. His sacrifice and high profile death and dramatic funeral followed in daily broadsheets across the globe yielding enormous international interest in the cause of Irish freedom and essential propaganda for the cause.

Atrocities continued with each side seeking the upper hand but with the hanging of 18 year old medical student and IRA activist Kevin Barry for his role in an ambush on army supply lorry provided another opportunity for outrage at home and overseas in what was becoming increasingly garnishing much unwanted negative publicity around the world as it struggled to contain what it saw as a law and order issue, to curtail and wipe out the leaders of independence movement with huge popular support enhance with each atrocity ascribed to the Crown. It was by then an intelligence war operated in Dublin by Micheal Collins against Dublin Castle, the seat of British power for some 700 years. As the conflict intensified, the British Government under Lloyd George moved to crush the push for an independent republic and employed the resources of imperial intelligence to bear on Dublin aimed at exterminating IRA Intelligence.

Sunday November 21st would be remembered as Bloody Sunday. It began with operatives of the IRA known as The Squad under the guidance of Michael Collins setting out to kill a group identified as leading British intelligence agents. Sixteen men died at various locations in the city that morning. A fierce reprisal followed that afternoon when the Auxiliaries, a division of the Royal Irish Constabulary attacked the national Gaelic football grounds known as Croke Park as Dublin played Tipperary, killing 14 civilians and a player before later that evening, three IRA prisoners were shot in detention. The British authorities reacted with determination in the violent days that followed with further reprisals and then a week later an IRA ambush took place on a quite road at Kilmichael in West Cork that would have significant political effect. A Flying Colum of rifle men led by General Tom Barry, a local volunteer who like so many Irishmen had fought with the British in World War 1 attacked a convoy of Auxiliaries, the elite force recruited from First World War British officers resulting in the killing of seventeen of these decorated warriors. It was an action that boosted IRA morale and send shockwaves through the imperial government only to be followed by even more violence with widespread raids, arrests, assassinations and burnings by Crown forces that included the burning of Cork in December on one side and a series of IRA ambushes on the British army and police and assassinations of suspected informers.

It was beginning of the most vicious period of the Irish War of Independence that raged on through the first half of 1921 before finally, Britain offered a truce on July 11th, 1921. The talks that followed in London led to the divisive 1921 Anglo-Irish Treaty, the acceptance of which by a narrow majority led to the establishment of the Irish Free State, a self-governing dominion of 26 of Ireland’s 32 counties with Northern Ireland remaining withing the United Kingdom. The treaty bitterly divided opinion in Ireland resulting in the Irish Civil War of 1922 -’23 with the pro-treaty forces forcing a difficult victory. (In 1949 the final vestiges of dominion status were discarded and the Free State declared itself a Republic of Ireland). 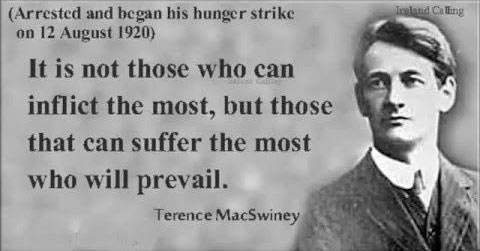 To learn more of this period, below are some worthy links….

The first are three hour-long episodes of a documentary made by RTE (the Irish public broadcaster) and UCC (University College Cork) and the second a recent British tv documentary on the period from a British perspective made by the Michael Portillo, British journalist and politician. May these powerful works enhance understanding of the road travelled to independence in Ireland and enjoyment in these days of restrictions!

The Irish Revolution episode 1 – We Lived in Dreams >>

The Irish Revolution episode 2 – That the Nation May Live >>

The Irish Revolution episode 3 – The Spirit of Freedom >>