St. Stephen’s Day celebrates the first Christian martyr and falls on December 26th. The Wren Boys provide a historical thread to Ireland’s tumultuous past.   However, the celebration of the day seems to have little relation to St. Stephen himself, although there is one tale that recounts the ‘chattering’ wren betraying St. Stephen to his enemies as he tries to hide from them in a bush. Another maintains that the wren is villified because it had betrayed Irish soldiers who were staging an attack on the invading Norsemen (who had been responsible for the destructions of the some of the great monastic communities of early Christendom, such as Abbey at Kells). Pecking at some bread crumbs left upon a drum, the wren betrayed the hiding place of the Irish and led to their defeat. 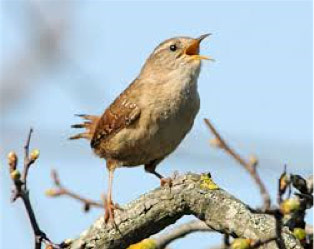 Irish Tradition holds that the wren symbolizes the old year, while the robin symbolizes the New Year to come. It was said that capturing the bird alive would herald in a new and prosperous year. As the king of the birds the wren occupied a prominent position in the druidic pagan religion, celebrating the Wrens Boys ritual is a good example of how Ireland’s pagan traditions were merged with Christianity.  Sailors and fishermen believed that those who possessed a wren feather would never be shipwrecked.

The group of Wren Boys usually dressed in costumes and masked (pictured at top) would travel from house to house or pub to pub in rural Ireland carrying the wren in a small box placed in a holly bush with red berries, collecting money or offerings of food and in each house they recited the rhyme that began:

The Wren, The Wren

The Wren, the Wren the king of all birds,
On St. Stephens’s day, he was caught in the furze.
Although he is little, his honor is great,
Rise up, kind sir, and give us a trate.

We followed this Wren ten miles or more
Through hedges and ditches and heaps of snow,
We up with our wattles and gave him a fall
And brought him here to show you all.

For we are the boys that came your way
To bury the Wren on Saint Stephens’s Day,
So up with the kettle and down with the pan!
Give us some help for to bury the Wren!

As with many Irish traditions, the Wren came close to extinction. From the twenties and thirties onward emigration took a great toll among those who would have taken part. There was strong clerical opposition – the money raised in the collections the Wrenboys took up went towards holding a ball in a local hotel or public house and naturally there was alcohol involved. The Church saw the Wren, as it saw the house dances that kept traditional music alive in those times, as an “occasion of sin.”

Nowadays the Wren is enjoying a revival in a few areas along the west coast especially in Dingle , Co Kerry and in parts of Co. Clare. In Dingle St Stephens day is a big day for the locals with a competitive element, each street has its own Wren Group (pronounced wran).  Here, the people wake early, the day is split into three parts, by 6 a.m. people are on the streets in straw costumes and fancy dress, parading about waving banners to announce The Wren Day and playing musical instruments such as Drums, tin whistles, accordions, guitars and bodhrans.   At noon the young children go from door to door in fancy dress, collecting sweets which are always in abundance during the Christmas season.  By early afternoon, adults and young paraders, all still in costume, join the rival parades that march and dance through the streets playing music and collecting money for charity and then later retire to the Dingle pubs where they play music long into the night. 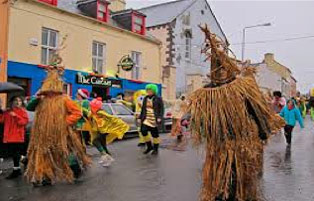 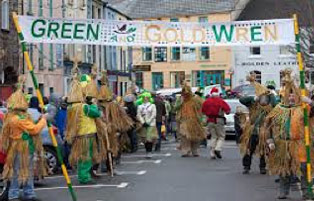